A Penny Ain't What It Used To Be

Follow A Penny Ain't What It Used To Be on WordPress.com
Posted on November 16, 2015January 18, 2016 Retirement Preparedness

Making good decisions – it’s something we’ve done with greater frequency as we’ve gained wisdom and experience.   Yes, we may regret a few decisions we’ve made however the consequences are in the past and we’ve learned our lessons well.  If you are like me, we are joining the more than 50 million Americans who will reach retirement age in the next 15 years.

As we prepare for retirement financially, we realize the financial landscape for retirees has undergone a seismic shift since we first entered the workforce.  I held my first job that generated a W-2 in 1973 and earned $2.50 an hour, 56% higher than the minimum wage of $1.60.  I earned $100 each week, took out $10 for spending money, paid a bit of tax and social security and banked the rest.  I remember talking with the office manager about the pension plan they offered and how it would serve me well, along with Social Security, when I retired.  Two trends have changed the landscape as we think about retirement planning today – retirement investment is now our responsibility, and we as a group are living longer.

Prior to 1980, many U.S. workers relied on Social Security and pension plans for their retirement income.  The significant feature of these benefits is they were generally based on years of service and the amounts were defined by the employers and the government.  Individual workers were not responsible for the investment of pension funds (that was the responsibility of the company) and workers knew what their retirement income would be before retirement.  Families could plan savings to cover any additional needs or expenses they had.

In the 1980’s pension plans were phased out and replaced by individually-directed retirement plans such as individual retirement accounts (IRAs) and 401(k)s.  The benefit of these new accounts is they are portable, meaning the funds we invest are ours to keep even if we switch employers.  The risk is that we need to make choices on how and where our savings are invested.  For many of us, saving for retirement has not been a priority.  According to recent census data, Americans aged 55-65 have only about $45,000 in savings, excluding their homes.

The second trend we’ve experienced is that we’re retiring earlier while we live longer on average. 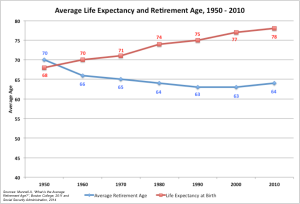 Our longer average years in retirement is increasingly raising questions about the quality of our retirement.  While we want to remain healthy, a long life carries the risk that we may outlive our retirement savings.

There are many advisors who can help us manage our retirement savings, but to place blind trust in them would be doing ourselves a disservice.  The typical American worker, earning a median salary starting at age 25, will pay an estimated $138,336 in 401(k) fees over their lifetime. That’s a lot of money, considering that it equals more than two and a half years’ worth of a typical household’s earnings.  A recent study by the Center for American Progress concluded that “the corrosive effect of high fees in many … retirement accounts forces many Americans to work years longer than necessary or than planned.”

My point is, whether we’re aware of it or not, each of us is ultimately responsible for our financial well-being in our retirement years.  Are you prepared to face this task?  That is the question I’ll address with you over the next few weeks.

Contribute to the conversation.  Share your thoughts by leaving a comment below or taking the two question survey below.